Acclaimed Cree/Salish songstress Fawn Wood weaves songs of longing, hope and the joys of life that uplift the soul and heal the heart. 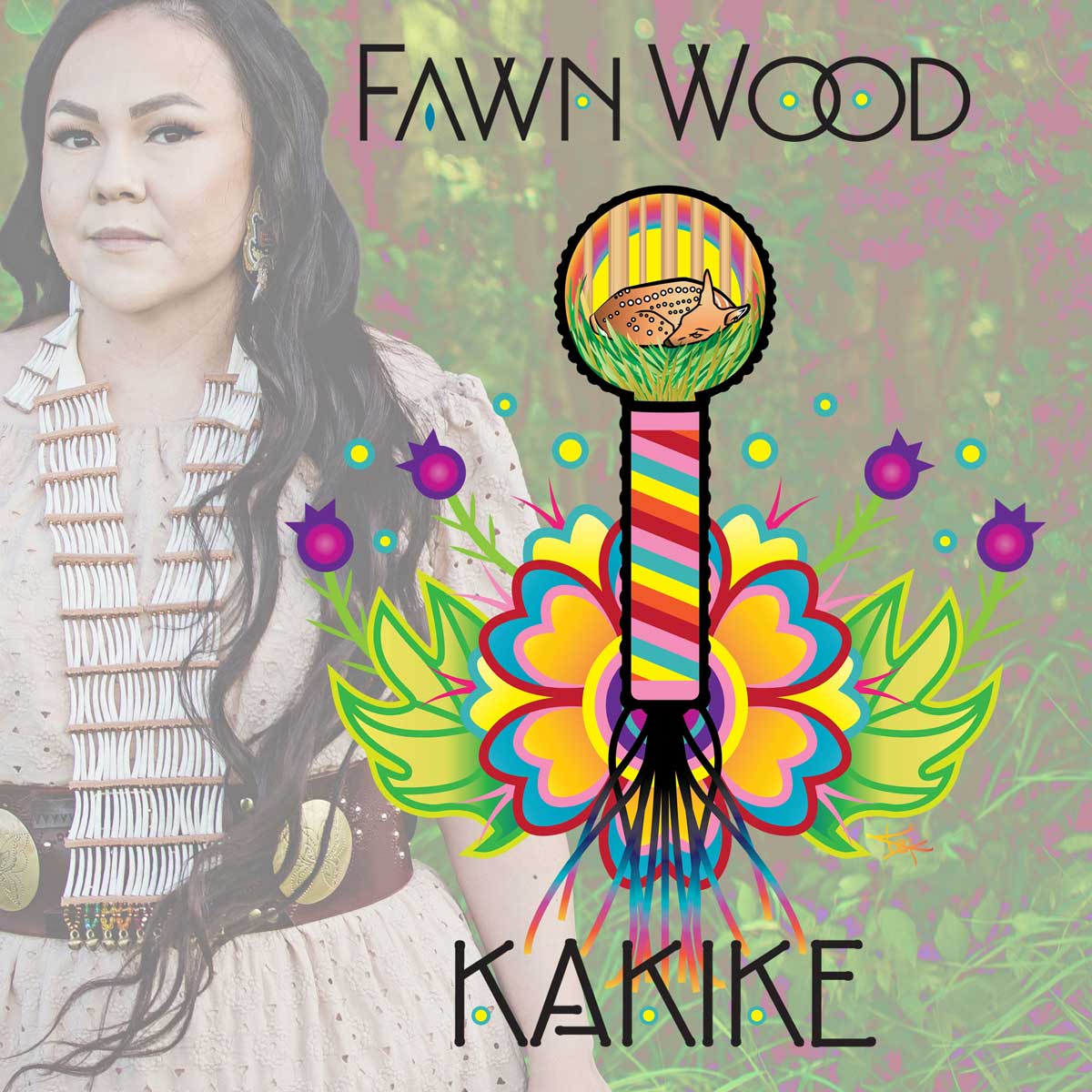 Fawn Wood was born in Cree Round Dance season on an icy October evening.  Through her father, Earl Wood of Saddle Lake, Alberta, she inherited the Round Dance and Pow-Wow singing traditions of his Plains Cree forefathers. Through her mother Cindy Jim-Wood she inherited the traditions and Salish chants of the Whonnock and Stlatlimx peoples. Since then, Fawn’s distinct style reflects the confluence of her parents’ tribal lineages.

At an early age Fawn would attend Pow-Wow’s alongside her mother and father at their big drum, singing out of tune, but happy.  In 1988, she traveled with her parents to the Gathering of Nations Pow-Wow in Albuquerque, New Mexico. After travelling 24 hours from Canada, her parents fulfilled their vow by setting up the family drum and singing one song at the Pow-Wow amongst all the well-known singing groups of that day.  Fawn sang alongside her parents, her ponytails flying to the beat as the three of them sang an early song by the legendary Northern Cree drum group (of whom her father was an original member).  That experience proved to be a deeply inspiring moment for Fawn. While being exposed to Pow-Wows from a very early age, Fawn also grew up singing the longhouse songs of the Fraser Valley and the berry picking songs of her mother’s Stlatlimx people

Many years have passed since her parents would fix up their cars to get to a Pow-Wow, knowing they would set up their family drum just to get gas money home.  In between then and now, Fawn has had many humbling times that have caused her to be grateful for all that she has now.

In 2006, Fawn was honored to be the first female to win the Hand Drum contest at the Gathering of Nations Pow-Wow.  This endeared her to Indian Country and in 2009 she went on to sing “The Proposal” in front of tens of thousands. Fawn represented her family and community in the televised opening of the 11th Annual Native American Music Awards (NAMMYS). Along with her husband, well-known Cree singer Dallas Waskahat, Fawn opened up the televised broadcast of Manito Ahbee’s 2010 Aboriginal Peoples Choice Music Awards in Winnipeg, Manitoba.

Released in 2012, Fawn’ debut solo recording, Iskwewak – Songs of Indigenous Womanhood (Canyon Records) collects songs of honor and celebration along with Round Dance songs that mirror the world seen through the eyes of a Native American woman. Iskwewak (meaning “women” in Plains Cree) pays tribute to the qualities of strength, intuition and love that form the cultural inheritance of Indigenous women. The recording went on to win “Best Hand Drum” recording at the 2013 Aboriginal Peoples Music Choice Awards and to bring Fawn the “Best Female Artist” award at the Native American Music Awards (NAMMYS).

Her long-awaited follow-up recording, Kikawiynaw (Canyon Records), was released to immediate critical and popular acclaim in 2015.  The recording quickly went to #1 (Canada) and #2 (US) on the iTunes New Release World Music Chart and remained in the top 100 for weeks afterward.  The recording also went to #14 on Billboard’s World Music Chart. Kikawiynaw demonstrated Fawn’s deepened vocal artistry and songmaking capability.  The album featured multiple collaborations with other acclaimed Native American/First Nations artists including Grammy-nominated R. Carlos Nakai and Grammy-nominated singers Kevin Yazzie and her uncle, Randy Wood.

Her most groundbreaking work yet, kakike will be released via Buffalo Jump Records in spring 2021. On kakike  Fawn weaves songs of longing, hope and the joys of life that uplift the soul and heal the heart.  She is joined by collaborators Dallas Waskahat, Charles Wood III, Tony Duncan and arranger/multi-instrumentalist Alan DiPerna.

Together with her husband, well-known singer and songmaker Dallas Waskahat, Fawn has released ‘Til the End (Drum Hop) and Blessings (Canyon Records). These two recordings demonstrate the brilliant artistic chemistry that these two share. Blessings saw Fawn and Dallas creating and highly innovative blending of Round Dance and traditional singing that was meant to facilitate inner healing.

On her journey of life, Fawn has developed a style of song that mimics her relationship with her people, herself, her family, and community. Her compositions draw upon her array of life experiences, happy times and those that are challenging. Her personal lyrics strongly reflect who she is. She is confident to show her strengths and not afraid to express weaknesses. Fawn especially reveals how song can be a vehicle of humorous expression in the face of life’s most challenging aspects. Through music, Fawn seeks to encourage hope for the betterment of all indigenous people, especially by encouraging indigenous women to connect to their identity through song. Lastly, she seeks to inspire the recognition of connectivity with our Native ancestors in guiding us to follow what needs to be done here in the modern physical world as well as the spiritual.

We use cookies on our website to give you the most relevant experience by remembering your preferences and repeat visits. By clicking “Accept”, you consent to the use of ALL the cookies.
Cookie settingsACCEPT
Manage consent